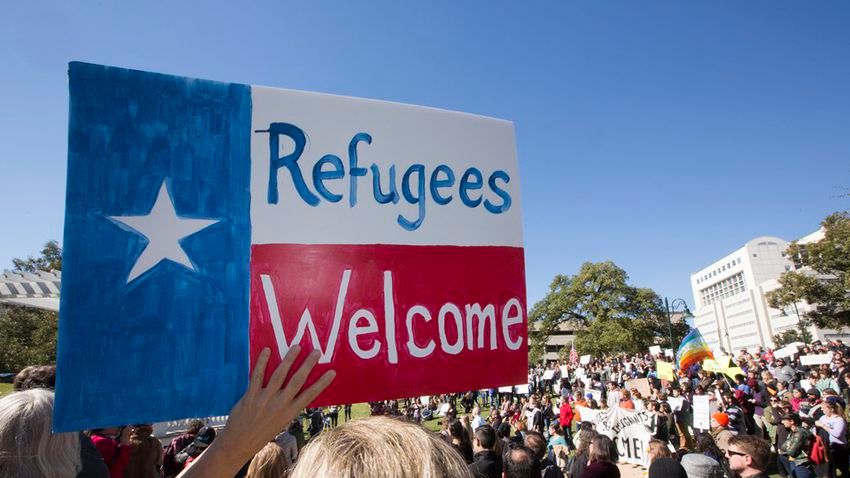 Jump to a Month

Go to Previous Go to Next 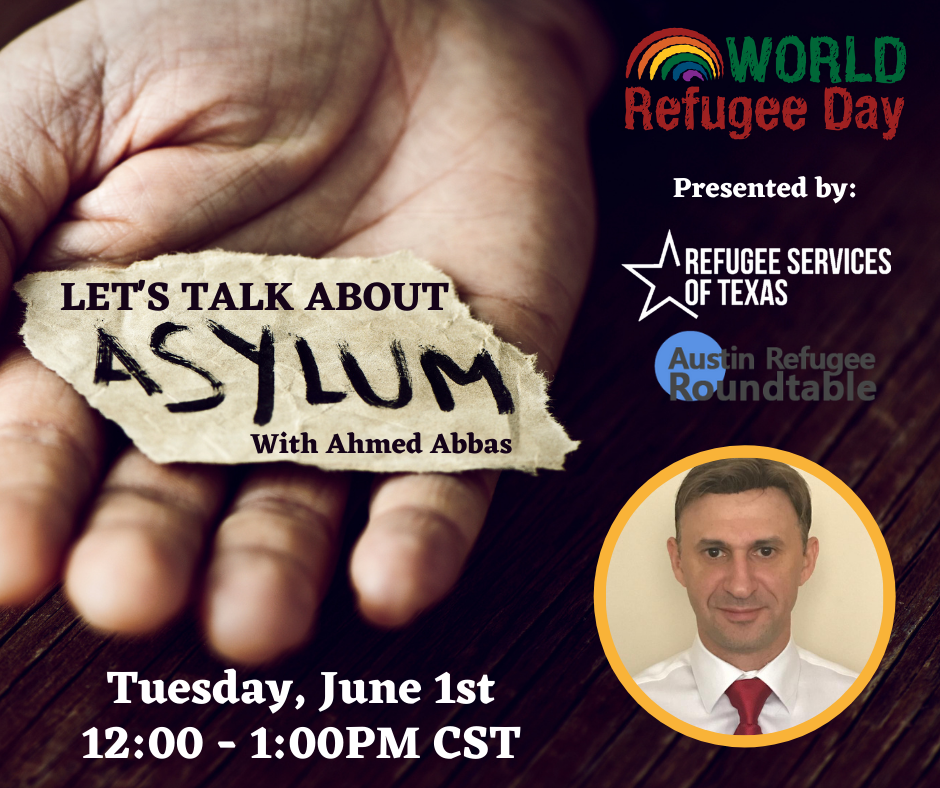 Join Refugee Services of Texas alongside the Austin Refugee Roundtable for a discussion about asylum with Ahmed Abbas, an asylum seeker from Egypt.

This discussion will focus on Ahmed's experience as an asylum seeker and as a case manager for asylum seekers in Austin, Texas. Bring your lunch and spend the first day of June with us!

Support for Asylum Seekers at the US Border and Beyond 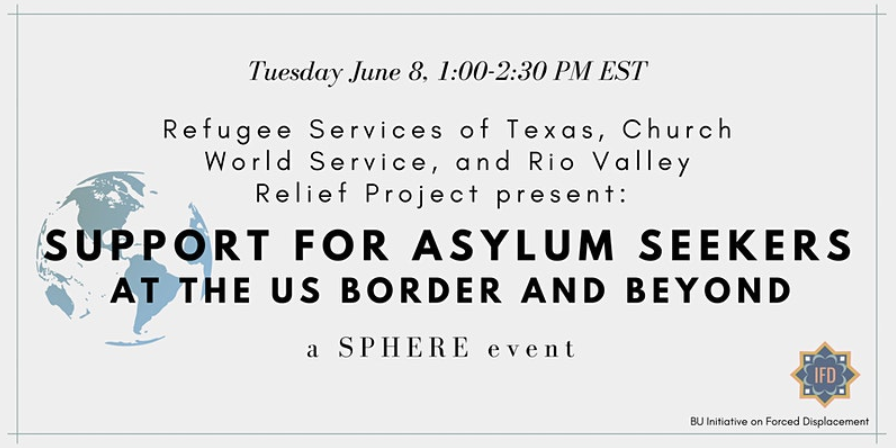 Join Refugee Services of Texas alongside the Rio Valley Relief Project and Church World Service to discuss their work among asylum seekers in shelters on the US border. Hear about their firsthand experience with a backlogged immigration system and enforcement policies that hinder access to services.

What are the most pressing challenges and the creative solutions to filling in the gaps where the government is failing to provide safe, efficient paths to due process? Learn about ways you can be involved in these relief and advocacy efforts - no matter where you're located! 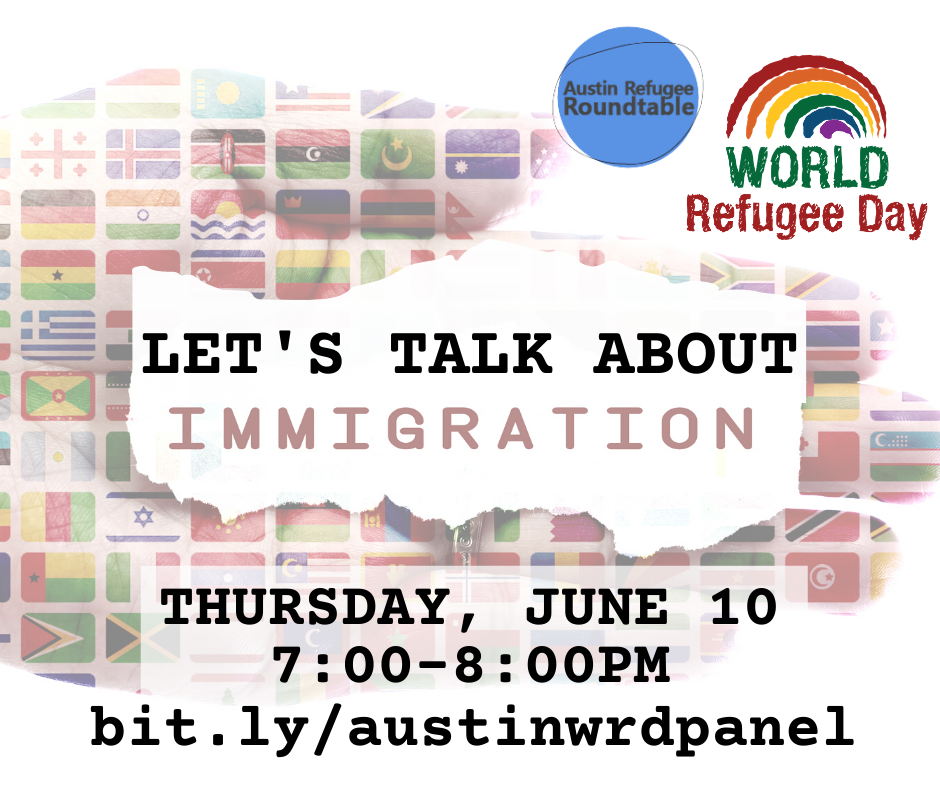 Join the Austin Refugee Roundtable for a live panel discussion on Thursday, June 10th at 7pm to dispel myths and dive into the intimate stories of a refugee, SIV, survivor of trafficking, and an asylum seeker, in which each individual will reflect on their unique immigration process in the United States. 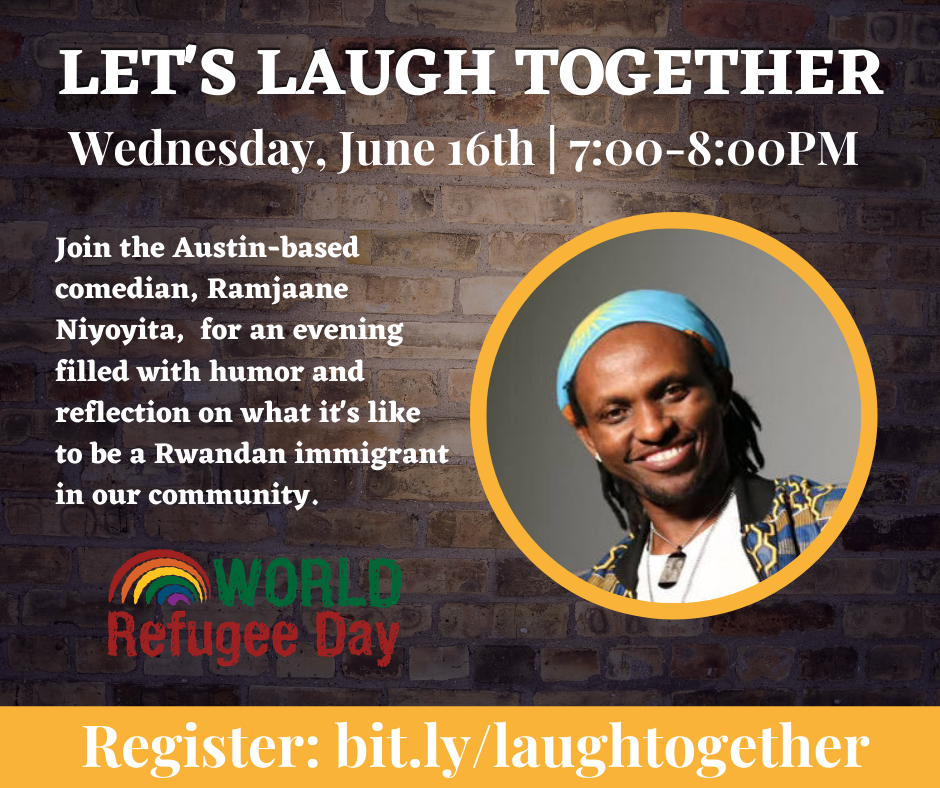 Join the Austin-based comedian, Ramjaane Niyoyita, for an evening filled with humor and reflection on what it's like to be a Rwandan immigrant in our community. 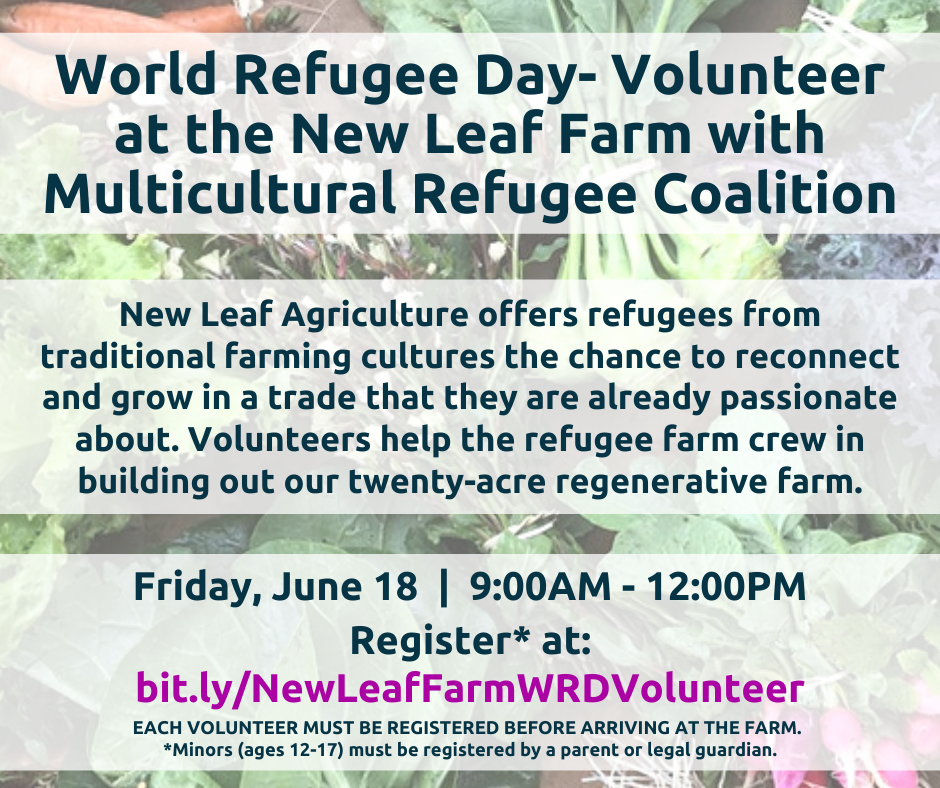 New Leaf Agriculture offers refugees from traditional farming cultures the chance to reconnect and grow in a trade that they are already passionate about. Volunteers help the refugee farm crew in building out our twenty-acre regenerative farm.

Join us at New Leaf Farm on Friday, June 18th from 9AM-12PM with the Multicultural Refugee Coalition for a Volunteer Day in celebration of World Refugee Day!

Volunteers might do a variety of tasks such as creating farm pathways, establishing cover crops, forming new beds, harvesting, and many other things while working alongside our New Leaf crew.

NOTE: EACH VOLUNTEER MUST BE REGISTERED BEFORE ARRIVING AT THE FARM. -- Minors (ages 12-17) must be registered by a parent or legal guardian. 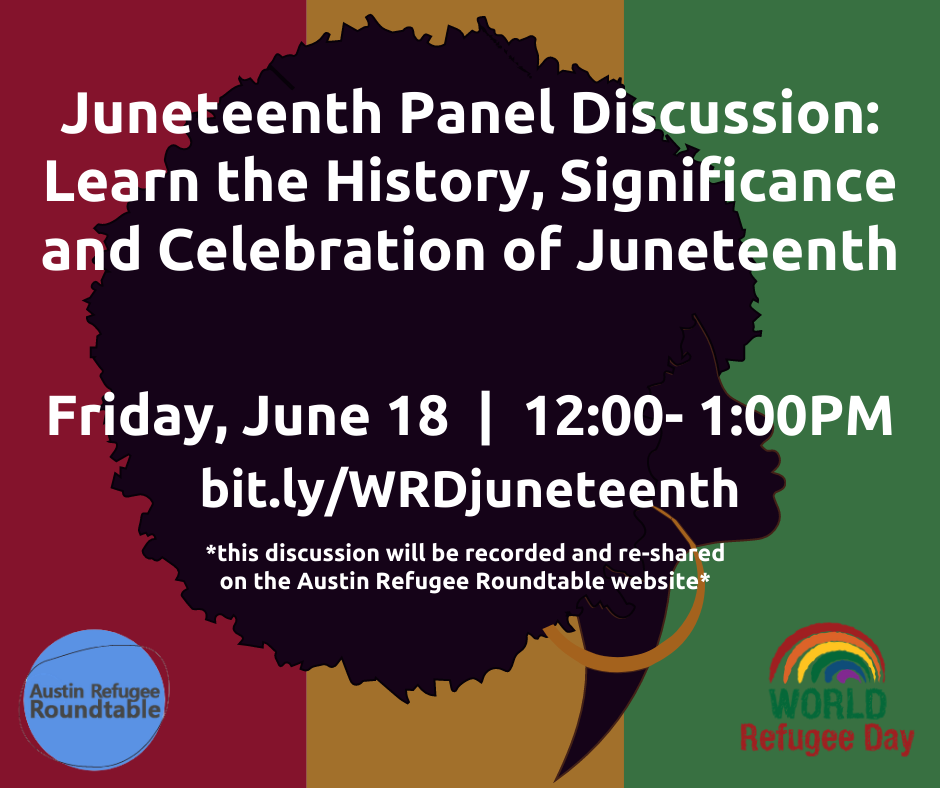 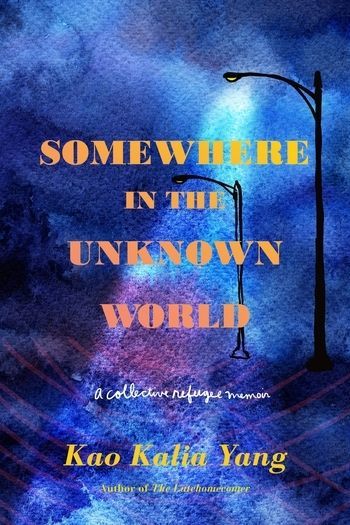 Join us on Saturday, June 19th at 10:00AM CST for our Saturday Book Club featuring Somewhere in the Unknown World by Kao Kalia Yang.

All over this country, there are refugees. But beyond the headlines, few know who they are, how they live, or what they have lost. Now, with nativism on the rise, Kao Kalia Yang—herself a Hmong refugee—has gathered stories of the stateless who today call the Twin Cities home.

Here are people who found the strength and courage to rebuild after leaving all they hold dear. Awo and her mother, who escaped from Somalia, reunite with her father on the phone every Saturday, across the span of continents and decades. Tommy, born in Minneapolis to refugees from Cambodia, cannot escape the war that his parents carry inside. As Afghani flees the reach of the Taliban, he seeks at every stop what he calls a certificate of his humanity. Mr. Truong brings pho from Vietnam to Frogtown in St. Paul, reviving a crumbling block as well as his own family.

In Yang’s exquisite, necessary telling, these fourteen stories for refugee journeys restore history and humanity to America's strangers and redeem its long tradition of welcome.

We'll start our Saturday book club meeting by hosting a Q&A with Kao Kalia Yang, lead by RST's Development Director Ashley Faye, and break into smaller community groups after to go even deeper into a discussion about the incredible stories in Somewhere in the Unknown World. 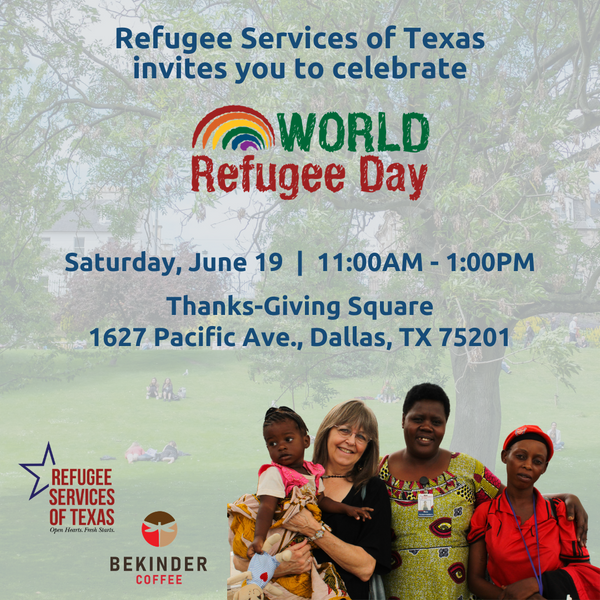 Join Refugee Services of Texas on Saturday, June 19th at Thanks-Giving Square between 11AM - 1PM for a World Refugee Day Celebration!

Meet some of the amazing RST staff, enjoy LIVE jazz music and grab some fun summer swag for a great cause! Baked goods and drinks will also be for purchase from our friends at BeKinder Coffee - all proceeds will go to RST!

Make it a fun family event, grab a couple of friends and enjoy this FREE event - be sure to RSVP* so we can save you a cup of coffee- we can't wait to see you there!

*come and go as you wish, capacity is limited to 55 guests* 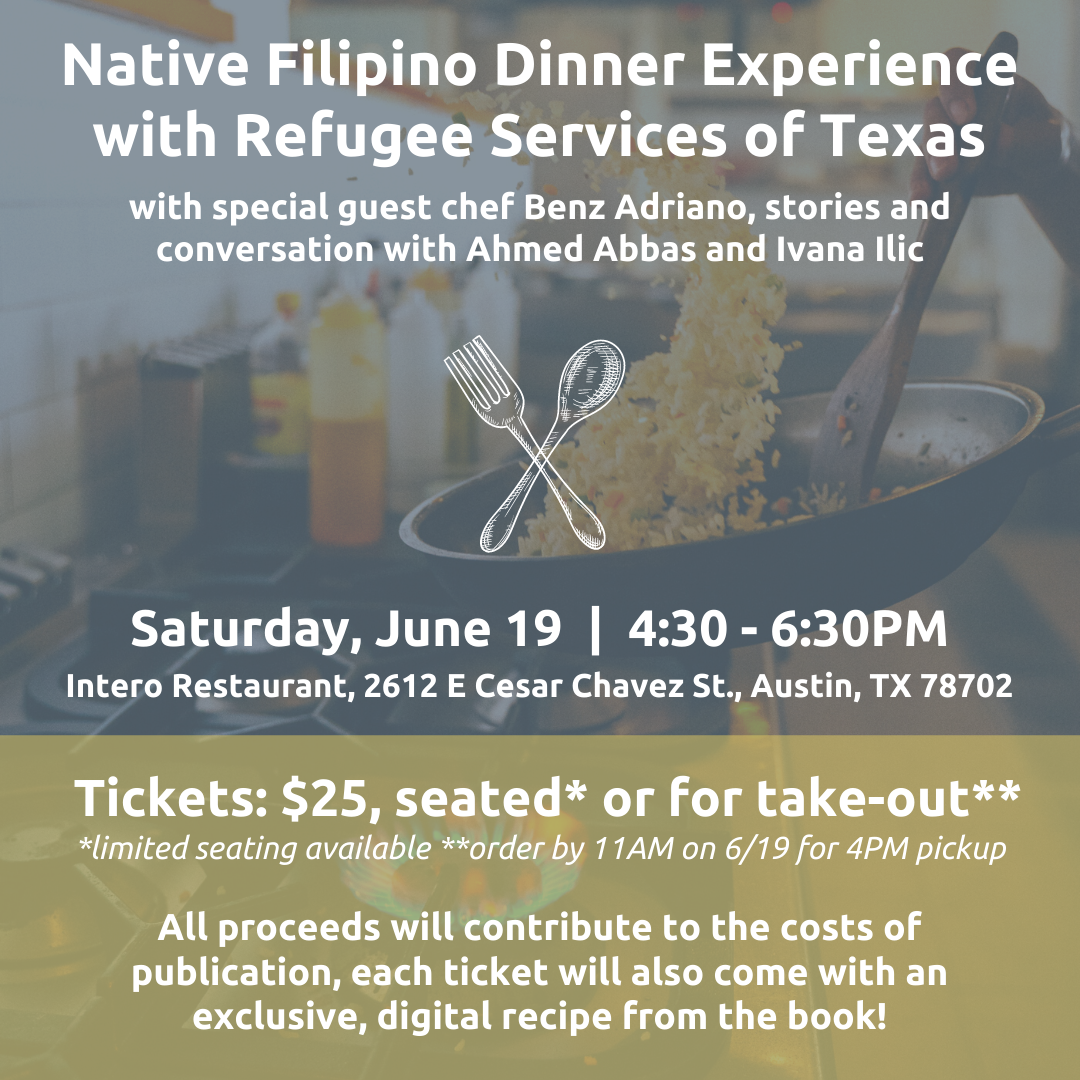 Benz Adriano, survivor of human trafficking and intern at Refugee Services of Texas, will be serving a native Filipino dinner and sharing his story of how he became a "thriving survivor" on Saturday, June 19th at Intero Restaurant in Austin, TX. This incredible dinner will include vegetarian fried rice, hand-made eggrolls, Filipino pork kabobs, and a special dessert!

Refugee Services of Texas will also be introducing our cookbook currently in production, Plated Stories: Legacies from Home to Table, featuring stories and recipes collected from refugees, trafficking survivors, and asylum seekers. Book contributors Ivana Ilic of Facebook and Ahmed Abbas of RST will also speak about their experiences as a refugee and asylum seeker.

Join us for this FUN in-person event OR enjoy this amazing meal to-go!

All proceeds will contribute to the costs of publication, each ticket will also come with an exclusive, digital recipe from the book! 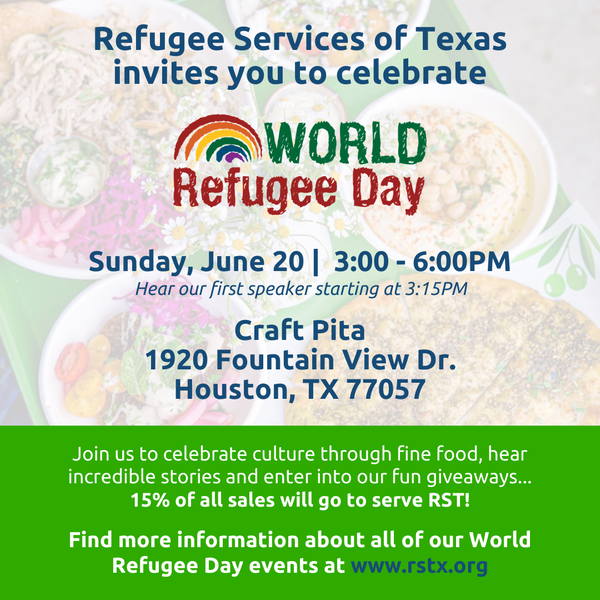 Treat the dad in your life to a delicious Mediterranean meal on Father's Day with our friends at Craft Pita, all while doing GOOD for the community and celebrating refugees!

Rafael Nasr, Peruvian-Lebanese-American, and owner of Craft Pita, will share his expertise in the kitchen with you on World Refugee Day! We'll also introduce you to and hear stories from local Houston friends Dr. Khawaja Azimuddin, Pakistani refugee and author of The Boy Refugee, Afghan refugee and RST employee Naqibullah Laghmanai, and former Yugoslavian refugee Natasha Djuich.

Join us to celebrate culture through fine food, hear incredible stories and enter into our fun giveaways... 15% of all sales will go to serve RST!

Refugee Services of Texas' offices remain closed to help stop the spread of COVID-19. RST case managers are available by phone, text, or email for clients only.

Refugee Services of Texas will also continue to adhere to our safety protocols currently in place and will require masks to be worn by all of our staff and volunteers when interacting with the families we serve in communities across Texas. *Volunteer opportunities are still available but remain limited at this time*